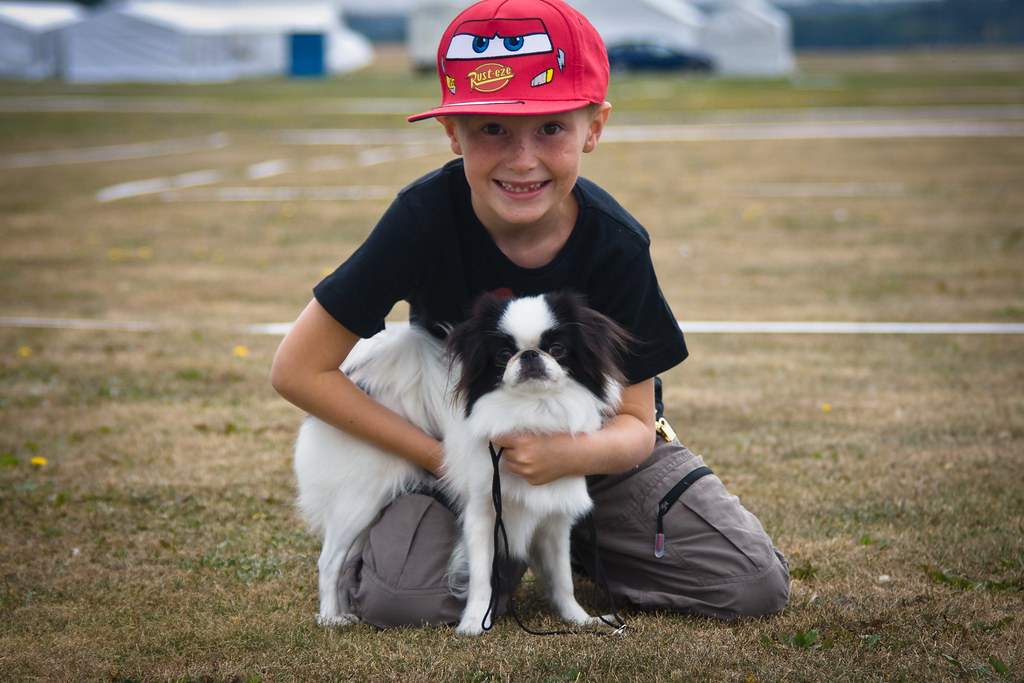 Last weekend Katarina and I worked at dog show in Vallentuna, Sweden. When we work, we obversely can’t show any dogs. But Philip was interested to attend and the dog show had a Child competition “Barn med Hund” so we let him to attend and show one of our Chins, Hilda. He performed very well and he was very proud (and we also of course) afterwords

You can see more from this day here

We have so much good memories among with some bad. Fritiof developed after some years breathing problems. He got surgery and became better, but not as good as we hoped, but he managed to survive.
When Philip was two-three years old, he participated with Fritiof in “Barn med Hund” (Kids Handling), but we all thought that it was more Fritiof that walked with Philip. I showed him a couple of times, but since he was “clowned faced” (one white eye) not typical Japanese Chin, I could not expect first places. Despite the Clown Face (he was a perfect Japanese Chin type); he won over his brother (once), and got a first place in open class and 2nd in competition for the judge Monique van Brempt at Visby International Dog Show.

Fritiof enjoyed to be in the garden, walking around by him self. When we wanted him to get in, we shouted at him, but he looked at us and ”said” ”Yea Yea, I shall only pee at this spot first” and then he came in.

Fritiof was never more than few steps away from me when I was home; he was just round my feets. We will never forget that he took care and to nurture / breed our puppies as an extra helping hand and of course he had an extra eye to Philip.

He gave us so much love, and now he will rest and be with ”Grand-Pa” which both very much loved each other.

This weekend we planned to drive down to Växjö for a one day Dog Show. It is like a 5.5 h drive one way and kind of tuff time of the year to drive. Anyway we change our plans and did start the day before, at Thursday evening, right after my work was done. This was a good decision. After a good sleep at our friends in Ramkvilla, we entered the Show. Very excited and some bit of nervous our two puppies, Jappegårdens Dai-Jin-Sojo (Agnes) and Jappegårdens Yumi-San-Sojo (Hilda) started the Japanese Chin ring. Both got very good critics and Agnes got the BOB Puppies.

With this excited result, we were ready for the Show and Japanese ring. Katarina entered with Jappegårdens Sojo-Sojo in Champions class and was best in that class and qualified to enter best of Dog class. In best of Dog class four dogs was in competition of getting the number one. The dog that has won most of the shows right now was here as well, he has beating Sojo several times before this year, but should it be this time as well. No, the judge Joo Schepers made a quick decision, Sojo was selected as number one. I’ll guess that Joo really like Sojo, because he had made him BOB before and also placed him at BIS-2 in Nyköping 2009.

At the final ring, we entered both with Agnes and Sojo. First out was Puppies, and this was really exiting. First official Dog Show with our puppies and to enter a Final ring, should our little Agnes be tuff enough to enter the ring with all that noise and waiting… She enter with a proudness, she was so good and looked so nice and so thought the judge Henrik Johansson as well. She was BIS-4!!  Sojo entered and was very excited. He really showed up and shined. Unfortunate the judge Mona Selbach thougt that some other dogs was better, anyway we were so proud of Sojo and little Agnes. A good start for the weekend and it felt little better to drive those 5.5 h home again.